The Lady In Red Painting (in her Louboutin Shoes) Story

The Lady In Red, in her Louboutin shoes is on the march. Today London, Tomorrow who knows, maybe Paris, New York or Berlin?

This little story charts the development of the concept of The Lady In Red, through its developmental stages. The latest version gives her a pair of Louboutin shoes. I will start with the first version and work down to the latest version. You can buy reproductions of this piece of art from our shop here: Read on for the thrilling story.

The Lady In Red First Version 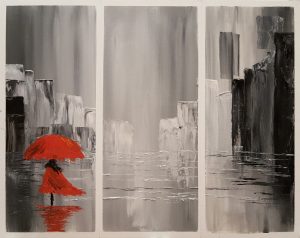 The idea of the “Lady In Red” came from a YouTube video by “Paint With Jane“. This video shows how a simple, but different monochrome cityscape could be produced using acrylic paint. My medium is oils, so I had a go at using oils to produce the same painting.

My first attempt can be seen on the above right, and I was rather pleased with it.

I got a high quality board and split it into 3 sections with masking tape.

I then used a Bob Ross type painting knife to smear on layers of paint in a impasto style. I used various shades ranging from pure Titanium White in the centre through to Ivory Black at the sides. This gave a sense of perspective that makes the centre of the painting look to be in the far distance. I also tried a flat brush on the right hand side to get a softer building outline, that could also give a sense of perspective – one for the future.

Knife work with a Bob Ross type knife scratched in the puddles. Traditional knife work added the Lady In Red and the umbrella. I scraped off the paint where the Lady went, because the red paint wasn’t sticking there.

The Lady In Red Second Version

Having decided on the basic style, I then moved to my first proper version.

A potential customer was put off by the rather large signature in the bottom left hand side. I rectified this in Version Three

The Lady In Red Third Version 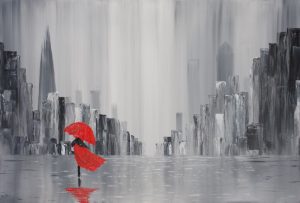 I also added little “splashes” where the rain hit the road, to make the foreground a little more interesting as well.

I also did a smaller signature in the bottom left corner. The original of this painting was sold to an Estate Agent (Realtor) who came to value my house.

The Lady In Red Fourth Version

Lady in a Red Dress, Louboutin Shoes and a Red Umbrella Walking Through London.

I traced through a London silhouette skyline onto the canvas. Then I then used acrylic paint in black, and 3 shades of grey. Then I used a pen to add the fine lines of the London Eye, and parts of Tower Bridge.

I painted this version was in the same way as the third. then I had to remove some paint so that the outline of the buildings could be seen though the Liquid White. I experimented with a flat brush to put in some buildings, but it didn’t work very well. So, I went back to the painting knife. I tried some individual falling rain drops to show in the foreground, but it detracted from the overall picture, so I took those out.

One thing to remember here is that thickly applied oils take days to dry and acrylics minutes. Lay the painting flat once you have finished it. If you don’t, you could find your buildings sliding down the canvas in the way I did.

I let the painting dry for a few days before I painted in the Lady in Red, and her Christian Louboutin shoes. How do we know they are Louboutin shoes? They have red soles and killer heels. I think the Louboutin shoes are going to be her trademark as she walks around the world.

I think the next version will be a full night scene.

As a footnote, I used this painting, with a black frame on, to advertise my framing business at a craft show. I didn’t actually sell any frames, but I sold the painting.